Ryan welcomed us to the Gila Bend KOA, Kampgrounds of America. As he showed us to our site, Ryan cautioned us to be watchful of snakes in our surroundings. Ryan went on to say if we see any snakes, to please call him immediately. When I commented that he sounds as if he is looking forward to seeing snakes, Ryan beamed and replied, “I love snakes. I had pet snakes all my life!” He told us that his pet python which was only 5 inches long when he first acquired grew to 5 feet when Ryan relocated to Gila Bend 3 years ago. Unfortunately, he had to give up his pet snake as there are no pet stores nearby that can supply its food. 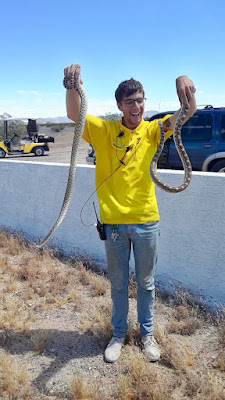 An affable young man, Ryan has certification from the Phoenix Herpetological Society to handle venomous snakes. He told us that anyone can attend the 3-hour long training course. A part of the course is  a lecture component and the remainder is hands-on training. $75 fee is reasonable as you would be gaining valuable knowledge. While I do have an intellectual curiosity, I don’t like snakes and I certainly don’t want to handle one even when using a tongue.

Ryan gave me a permission to include his photo with “wild snakes” from the RV Park. When we asked what did he do with them, his reply was that he would take them to an area about one-mile from where they were caught. Snakes are area specific and if they are taken more than a mile out of their habitat, they might not be able to find their familiar food sources.