The original Tacoma Narrow Bridge opened for traffic on July 1, 1940. It was the first suspension bridge in the United States. The bridge spanned the Tacoma Narrows strait of Puget Sound between Kitsap Peninsula and Tacoma. It is remembered for its collapse on November 7, 1940. At the time, this was the third longest suspension bridge in the world. 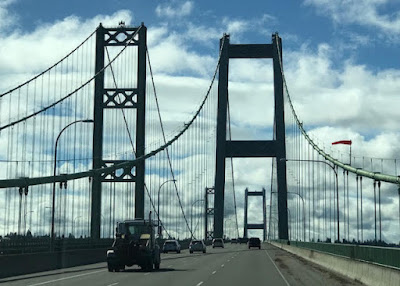 The cause of collapse was the vertical movement of the bridge under 40 mph wind. The collapse prompted research into bridge aerodynamics-aeroelastics, which has influenced the design of all later long-span bridges. The new Tacoma Narrows Bridge opened 10 years later.
This morning Honu was buffeted and we felt the force of wind, but J.J. and I felt confident that we are driving on an aerodynamics-aeroelastics sound structure.
We stopped for a picnic lunch inside Honu at the Gee Creek Safety Rest Area. While J.J. took a rest from his driving, I went on a quick 2 mile walk in the surrounding woods. 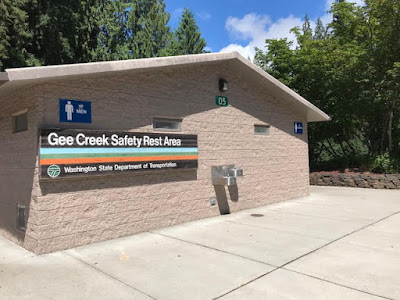 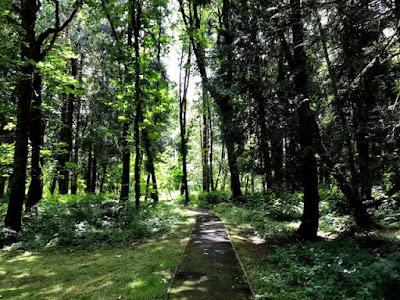 The second bridge we crossed was the Steel Bridge that is through truss, double-deck vertical-lift bridge. It spans across the Willamette River in Portland, Oregon. The bridge opened in 1912 is designed for railroad, bicycle and pedestrian traffic on its lower deck. We drove across the upper deck designated for vehicular traffic. It is the only double-deck bridge with independent lifts in the world. We have crossed it several times in Honu and I would love to walk across one day. 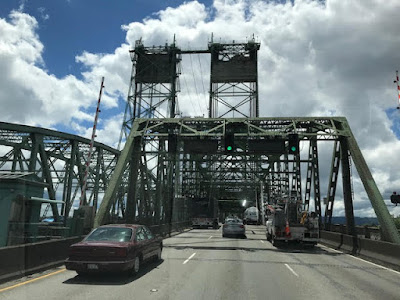 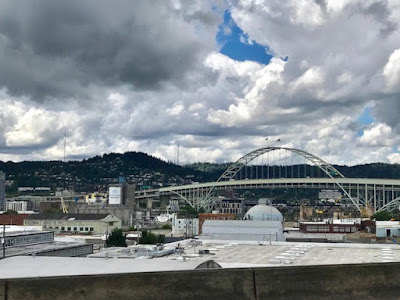