Ibis Hotel is an international hotel owned by AccorHotels, a French hospitality company. AccorHotels was founded in 1967 and, as of December 31, 2018, there are 1,152 hotels throughout 67 countries. We realize that Ibis Hotels each has its own characteristics. For example, this particular property must have an excellent management. From the front reception to dining room to the housekeeping staff, everyone is polite, cheerful and helpful.

Sarifa (left) and Tiago always greets us with “bom dia” (good morning) and when I told them our room number in Portuguese, they showed their genuine delight. 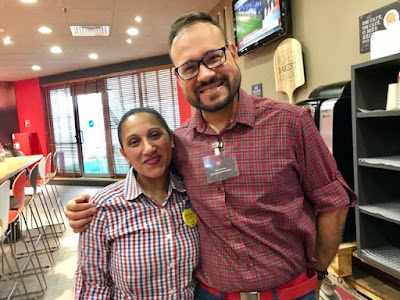 While J.J. and I were preparing for our travel to Lisbon, seeing this monument was one of my top priorities. Located in the district of Belém, we found that easiest and most direct way to get there is to take a public bus. Our metro pass can be used for the municipal bus system. We boarded a bus which charged us €2 per person one way, and after about an hour navigating through mostly narrow streets, we arrived at our destination.

Padrão dos Descobrimentos (Monument of the Discoveries) is fittingly located along the river where ships departed for India and the Far East. The name refers to the time period when Portugal was a world maritime power. This was during the 15th and 16th centuries. 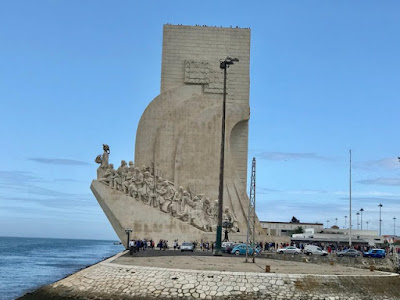 Gleaming white under the overcast sky, with so many tourist buses and coaches trying to enter its museum, I was happy to take in the scenery from across a natural land break. 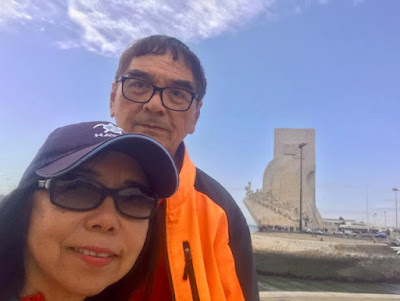 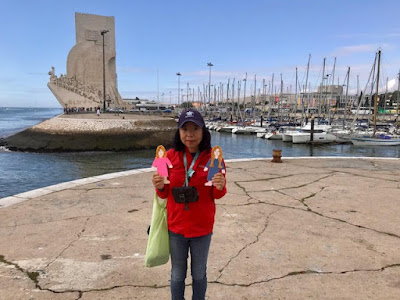 By now, the two of us are accustomed to walking. After enjoying a light snack, J.J. and I crossed the main boulevard for a view of the Cristo Rei, statue of Christ with arms raised, blessing the city.

The Ponte 25 de Abril, 25th of April Bridge, is a suspension bridge often compared to the San Francisco Golden Gate Bridge. Here is an interesting story about the bridge:
From 1966–1974, the bridge was named Ponte Salazar (Salazar Bridge) in honor of Portuguese Prime Minister Antonio de Oliveira Salazar. After the Carnation Revolution which overthrew Salazar’s dictatorship, the bridge was renamed April 25, the date of the revolution. 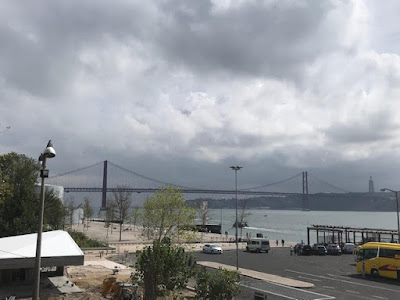