Some of us might remember the 16 days in February 2005 when Christo and his late wife, Jeanne-Claude installed 7,500 gates along Central Park’s walkways. The gates were each adorned with shimmering saffron-colored panels. Christo described them as “a golden river appearing and disappearing through the branches of the trees.” The project cost $20 million. It was financed by the sale of Christo’s artworks. It attracted four million visitors to view his golden River and pumped nearly $250 million into the city’s economy.

"It put New York City in the international headlines for something hopeful for the first time since 9/11,” said Patricia E. Harris, the former deputy mayor and, for decades, a leading supporter of the project with her boss, Mayor Michael R. Bloomberg. “It reminded the world that our city’s artistic spirit was alive and well.”

Christo, known as a conceptual artist, just finished his latest project in Italy. The Floating Piers is a walkway on water. It stretches nearly 2 miles connecting two small islands in Lake Iseo in the Lombardy region of Italy. 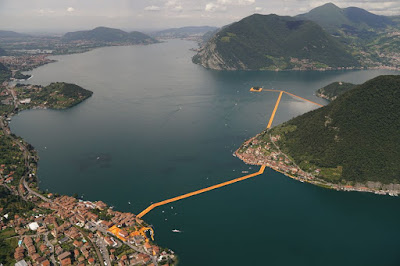 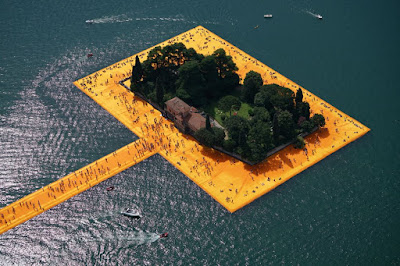 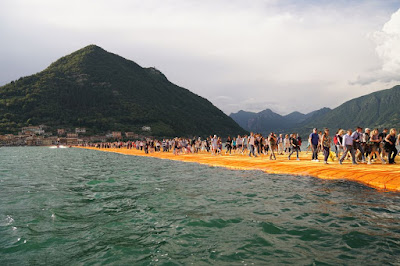 As in all the projects of Christo and his late wife, Jeanne-Claude's projects, "The Floating Piers is absolutely free and accessible 24 hours a day, weather permitting,” Christo said in a press release. “There are no tickets, no openings, no reservations and no owners. The Floating Piers are an extension of the street and belong to everyone.”

Christo and the late wife, Jeanne-Claude’s projects are playful, joyful, fleeting public artwork that offers fantastical relief from the ordinary. Christo, an energetic 81 years young man with a grinning face and twinkle in his eyes, announced his next project. "Over the River" will cover a segment of the Arkansas River, the most rafted river in the United States. J.J. and I hope to keep tab of Christi's project so that we could experience this fleeting art that might profoundly impact the way we see our world.