Napoli is the birth place of pizza and Sophia Loren (an Italian actress known for her voluptuous figure). Here is a shopkeeper capitalizing on both. 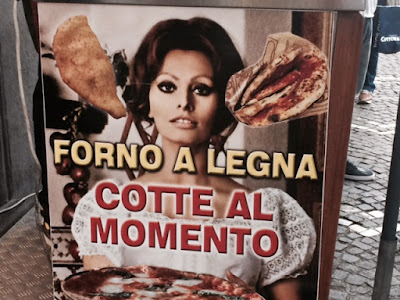 J.J. and I purchased Eurail Pass train tickets. The cost is $277.50 per person on business class and it can be used in Italy on any 6 days within one month period. To ride in Business Class on the Express trains, reservations are required. The cost to reserve a seat is €10 per person per ride. 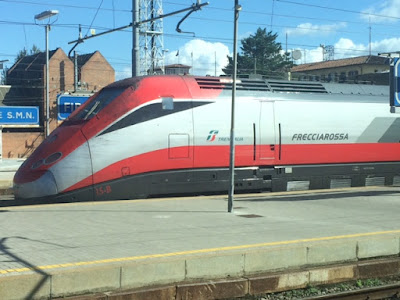 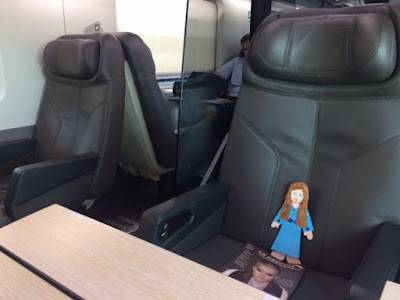 The quality of Business class is comparable to the Green Car of the Shinkansen in Japan. I must emphasize that quality and cleanliness of toilet facilities plus complimentary services far exceeded the Premier Economy Class we experienced on Alitalia. The uniformed staff cheerfully served snacks (cannoli, chips, biscotti) and choice of beverages -- wine, beer, soft drinks or coffee. Plus free WiFi which by the way is available nearly in all cafes, restaurants, airport and train stations. 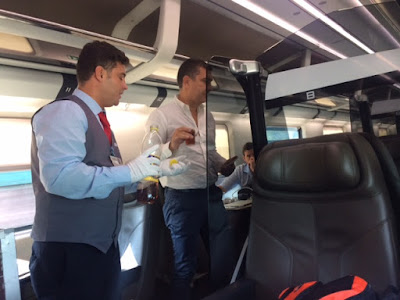 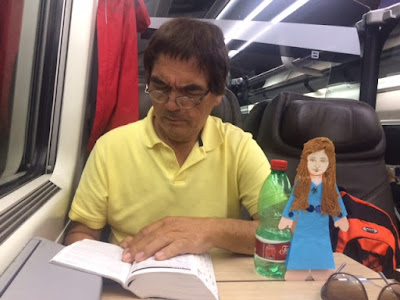 Our train ride took us from Napoli to Roma Termini, then to Bologna where we transferred to a regional train to Ravenna. The total travel time was 5 hours!  The route cut across the center of Italy traversing beautiful rolling farmlands, with mountains starting to wear fall colors. 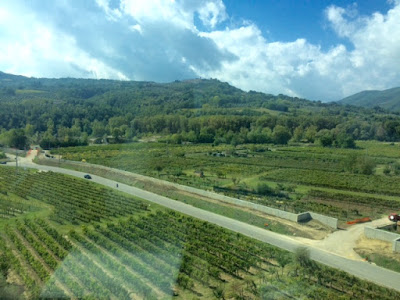 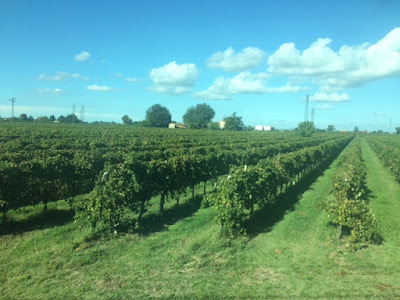 Gypsies used to harass people  by having children surround you with cardboard and chants of "give me money". Some even handed baby into the arms of-unsuspected tourist. While the victim tries to return the child, gypsies skillfully pick pocketed the tourist. With visible forces of armed  police around tourist areas, we now see gypsies working on regional trains. Usually in pairs, they hop on a train, one plays tambourine or accordion along with very loud recorded music. Then the other walks along aisles with a paper cup asking for money. Not aggressive but rather annoying.

Today a gypsy woman quietly left this note on each passenger's seat.  After working the entire train, she returned to collect money. When none in our compartment gave, she made a gurgling noise and hopped off the train to climb into a train going the opposite direction. 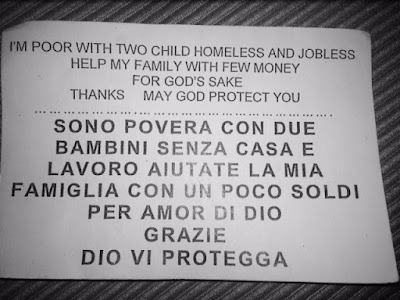 Delightful impression of Ravenna as we disembarked the train. Sorry my iPhone battery is less than 10% remaining. I will take photos when J.J. and I go on a walking tour of the city tomorrow.