My Mother cultivates Kiku Imo, English name Jerusalem artichoke, and scientific name Helianthus tuberosus. Other names include sunroot, sunchoke, and earth apple. About 3 months after she started adding Kiku Imo to her cooking, my Mother noticed that her hair became thicker. This was confirmed by her hair dresser. The commercial version of the tuber is available at health food stores as a dietary supplement for diabetes. There are other health benefits. 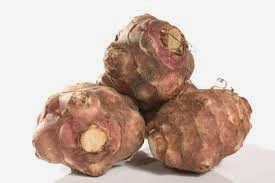 Jerusalem artichoke is a species of sunflower native to eastern Canada, Maine and North Dakota. It is also grown in Florida and Texas. The plants grow between 5 and 10 feet tall. The texture of the leaves are coarse and hairy.  Thetubers are thick and somewhat resembles ginger root in appearance. The color of the tuber can vary from white to pale brown and even red or purple. 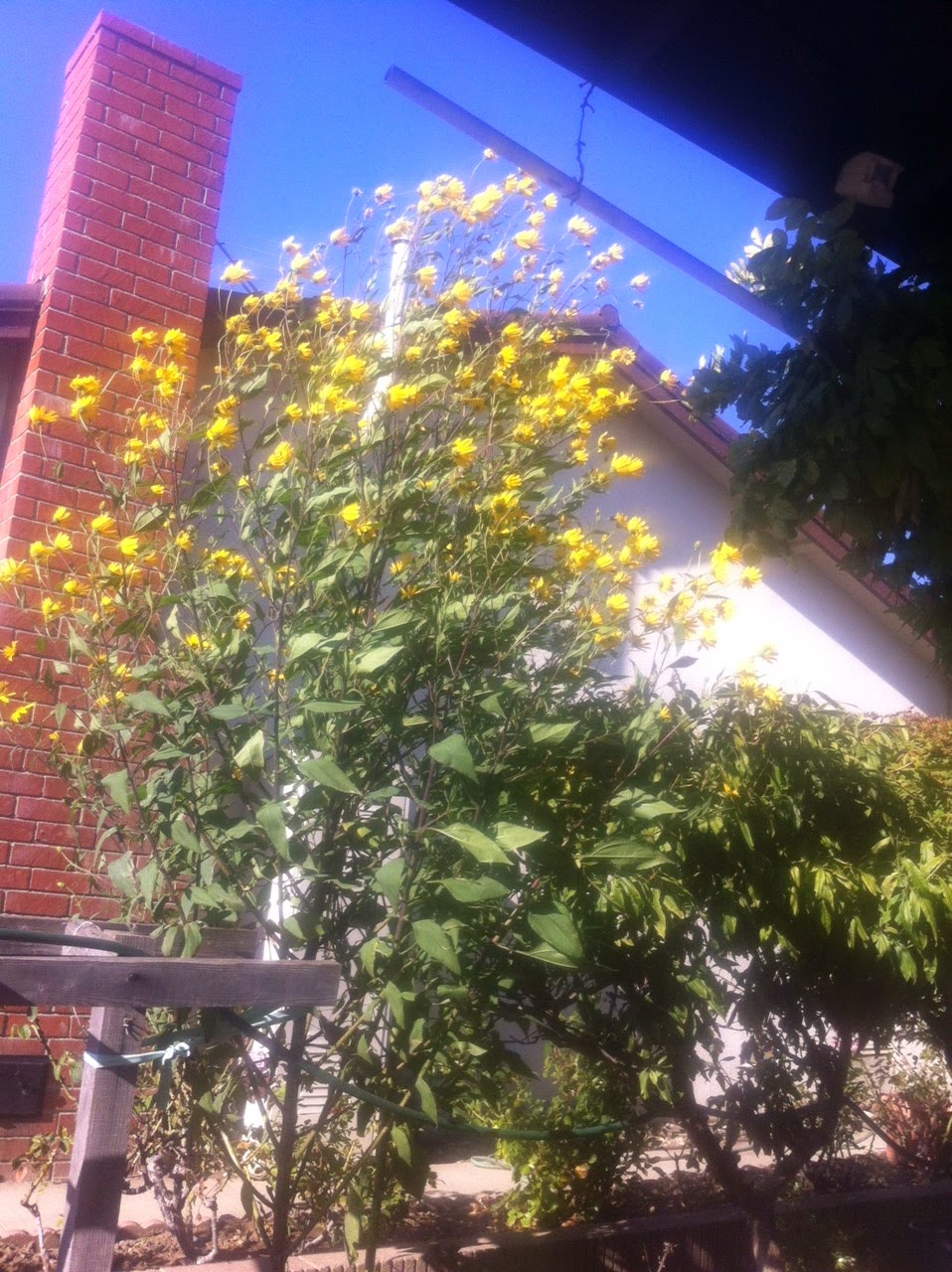 The name Kiku Imo or "chrysanthemum potato" comes from the appearance of the flower and the tuber. The English name Jerusalem artichoke is a strange one because the plant is not any type of artichoke and it has absolutely no relation to the city of Jerusalem. Early history of Native Americans mentions Jerusalem artichokes being cultivated by different tribes. In 1615, samples of the tuber from Canada were on display at the Vatican, crediting the plant for helping French Canadian settlers survive the winter. Today, Jerusalem artichoke is widely used in French, German, Italian, Romanian, Russian, and Spanish cuisines. During the 2002 Nice Festival for the Heritage of French Cuisine, the Jerusalem artichoke was voted as the best soup vegetable.

It took my Mother, J.J. and I almost all day to dig up the tubers; wash using a scrub brush; rinse several times; scrape off the skin; slice, then dry in a fruit dryer. My sister joined us late afternoon and we kept up the assembly line. The last segment was J.J. grinding the dried slices into a powder using a coffee grinder. 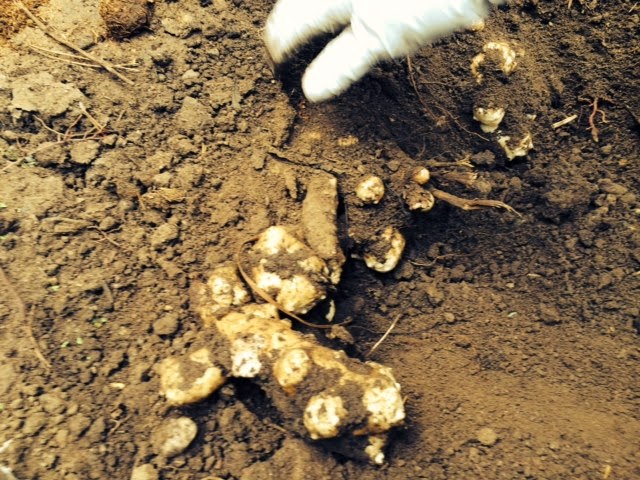 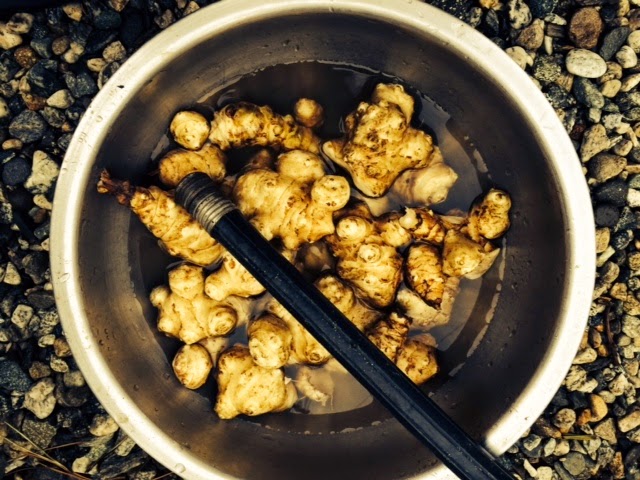 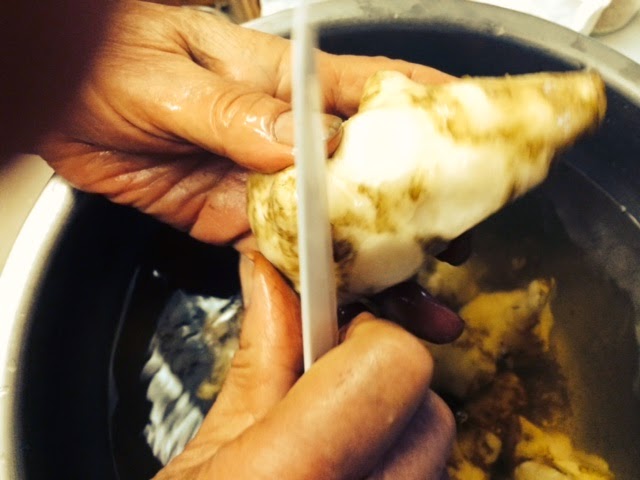 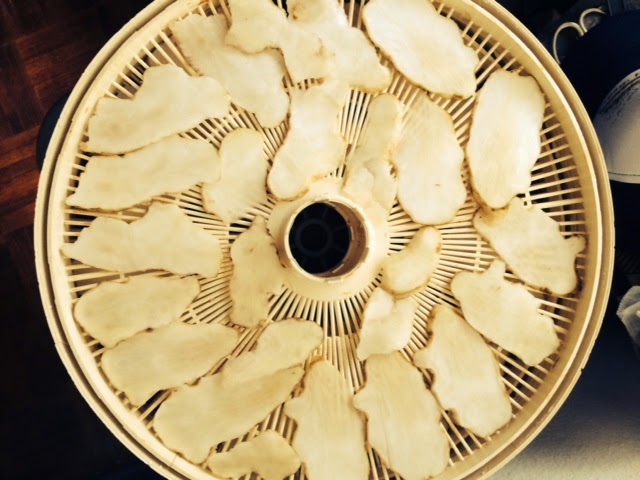 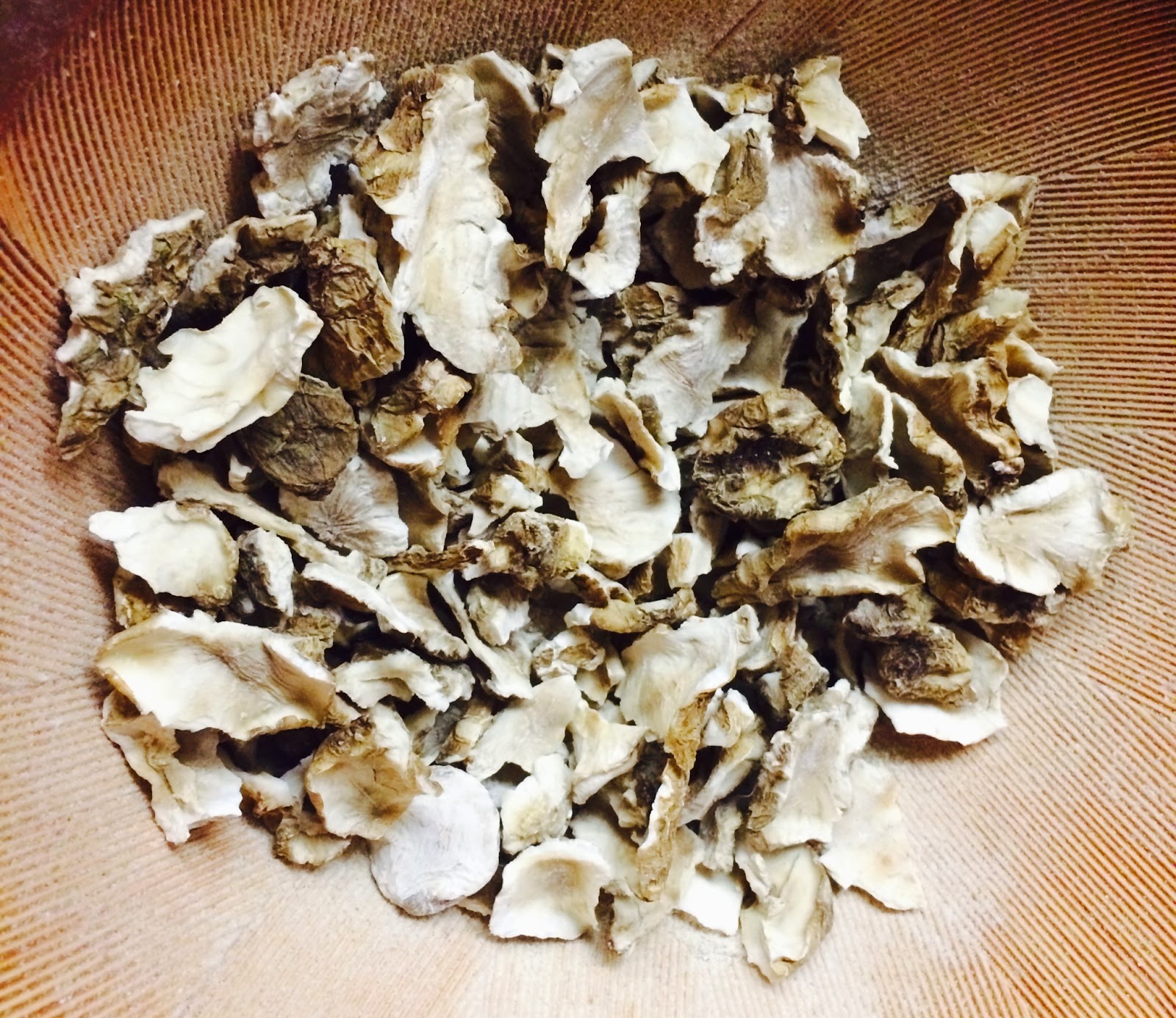 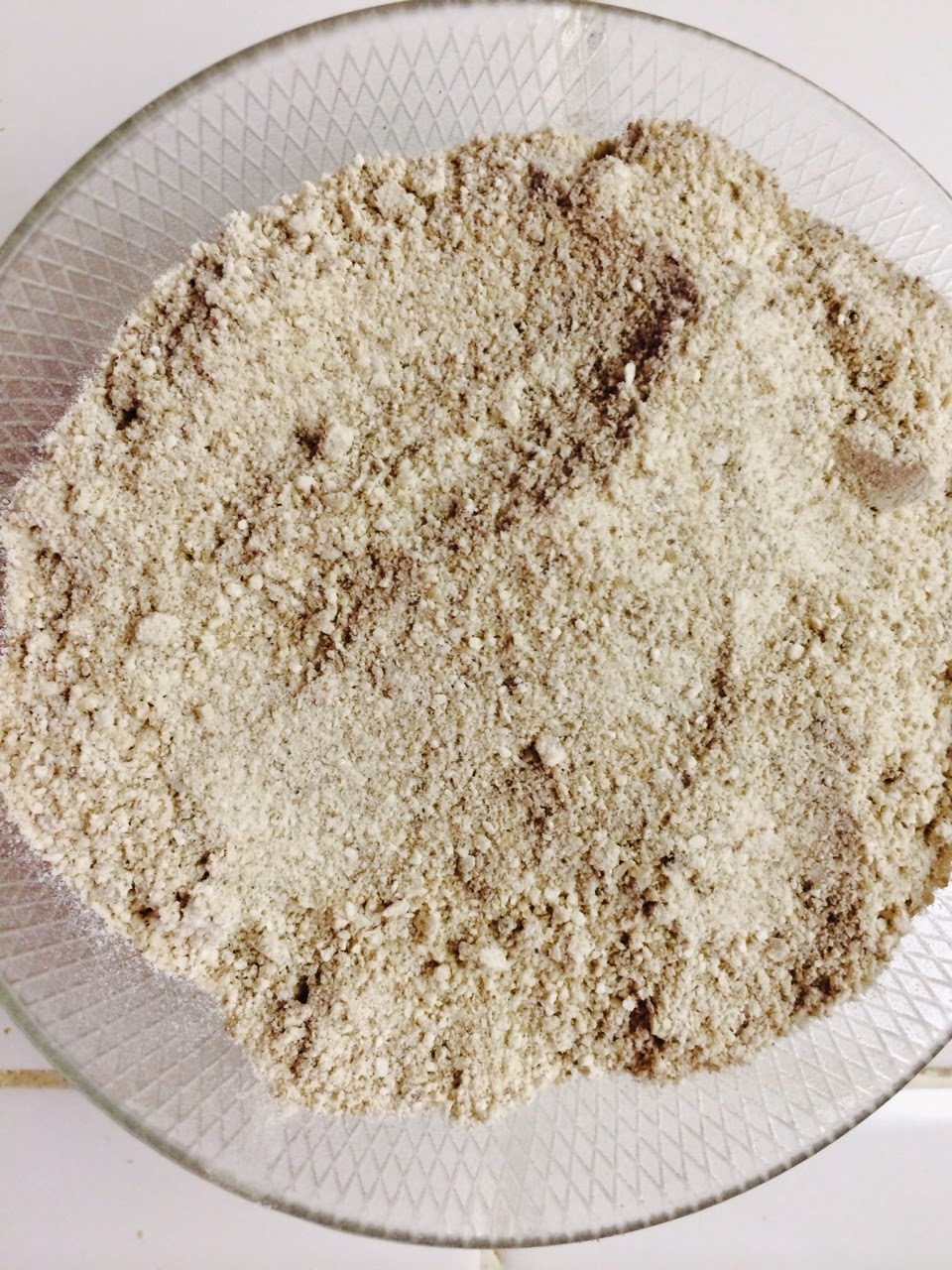 J.J. and I are now believers of this "Super Food." We will add a teaspoon of powder daily to our diet. 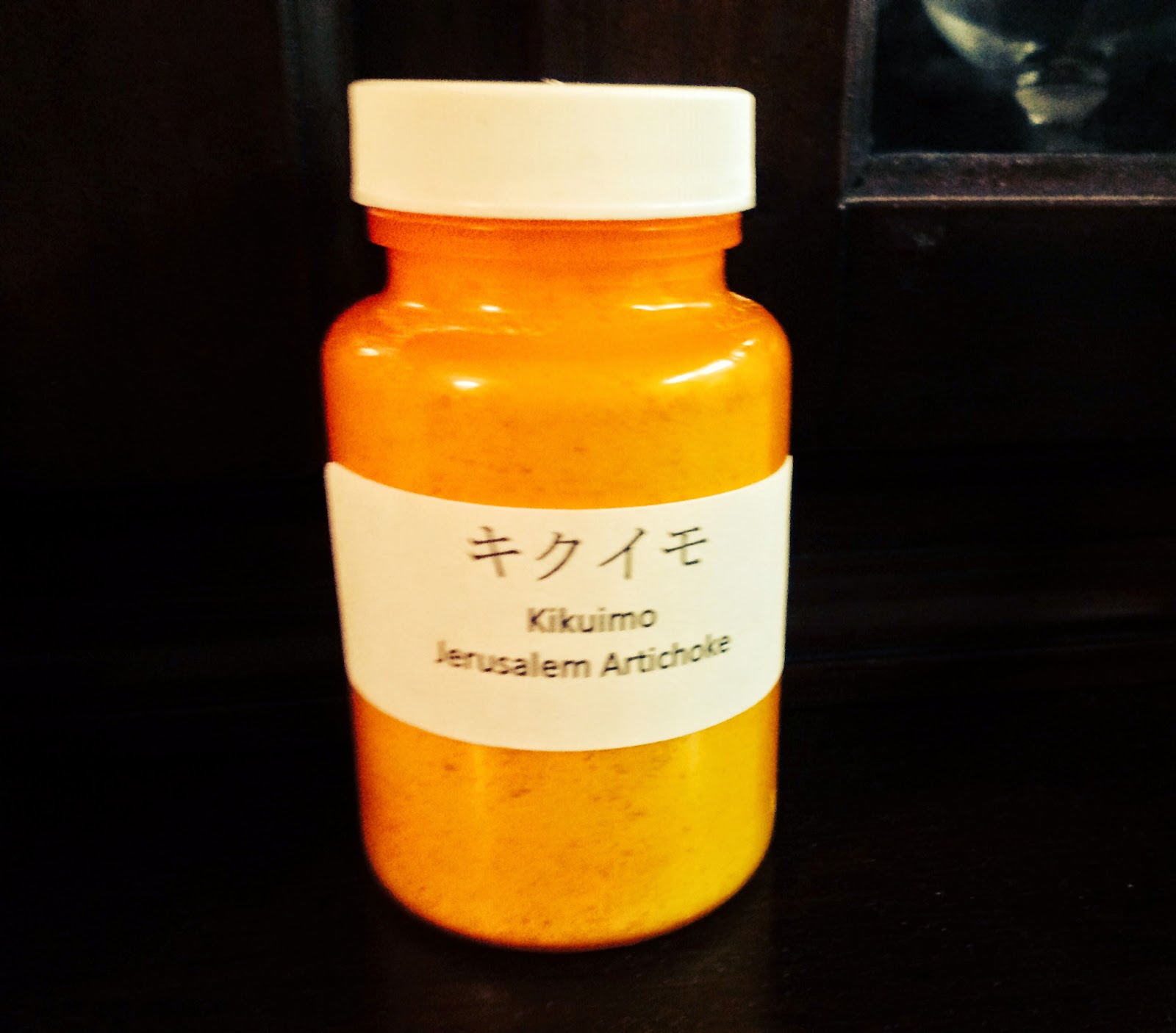 Please refer to www.yogaandmeditationforseniors.blogspot.com for nutrition facts and health benefits.